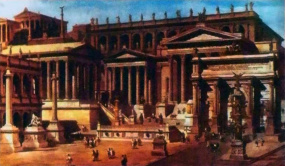 This textbook succeeds the manual of Roman law written by Róbert Brósz and Elemér Pólay, published in 1974. This new work of András Földi and Gábor Hamza offers a more extensive treatment of Roman law than the two-volume manual of Kálmán Személyi published in 1941. In this textbook the reader finds a detailed treatment of the subsequent history of Roman law it can only be compared to the classical work of Tamás Vécsey, (the last edition of which appeared in 1907).

The volume, as suggested by its title, presents the history and the institutes (i.e. the classical material) of Roman law. The historical part, however, does not deal exclusively with governmental organization and the legal sources of ancient Rome, but also traces in detail the continuous presence of Roman law in different contemporary legal systems.

The structure of this handbook, is as follows:

The textbook includes an extensive bibliography, as well as three detailed indexes comprising more than 3000 entries.

The authors have followed the traditional method applied in Hungary, which is characterized by a comprehensive, clear style as well as the organic insertion of sources in the text, both in their original Latin and in Hungarian translation. In order to facilitate cross reference, a system of numeration in the margins is applied. The topics are presented in a hierarchical system of titles comprising ten different levels. The typography, consistently used throughout the book, utilizes the most recent methods and renders it easy for the reader to find as well as to learn the essence of the subject.

The Authors describe Roman law as the basis of contemporary legal systems. Beginning with the Middle Ages and continuing through into the modern era, the textbook analyses, in a detailed way, the influence of Roman law among the great part of European countries as well as in countries overseas, including the United States. Therefore the Authors offer, in an abridged form, the results of their researches carried out for decades. This is the first time, even on the international level, that the subsequent history of Roman law has been described in a concise, but at the same time richly documented, way. The book also traces the survival and development of a number of legal institutions of fundamental importance, so that the reader can follow the analysis of continuity both in the material of the legal institutions dealt with and in the last chapters of the five main parts.

Innovation in substance is, however, not limited to the description of the subsequent history of Roman law, but is also carried out in describing the legal doctrines of Roman law itself, which are presented in compliance with the sources, yet in a modern, systematic way. The Authors, therefore, have laid particular emphasis on providing precise definitions of the legal terms, and they have also made great effort to set forth the jurisprudential features and the social background of the various legal institutions. Terms like „damages”, „liability”, „validity”, „efficacy”, as well as a number of other legal problems having fundamental relevance for contemporary jurists are put in a new light.

Whom is the textbook for?

The textbook of András Földi and Gábor Hamza, which is also intended as a work of reference, constitutes a useful and valuable tool

Our offices are easily accessible both by public transport and by car.

Show the nearest transit lines and stops on the map

Show the nearest parking options on the map